On 24-29 September there was a Project meeting held at Zidikai Marija Peckauskaite Secondary School (Mazeikiai region, Lithuania) where the partners from France, Bulgaria, Belgium, Italy, Spain and Denmark took place. 14 teachers (including two headmasters) and 14 students from abroad were present at the meeting.

The guest teachers also had a meeting with the Mayor of Mazeikiai and other representatives of the municipality. The school headmistress Rima Sirvinskiene accompanied the guest headmasters from Italy and France to the  Educational centre of Mazeikiai where the education and qualification system of our teachers was discussed.

The partners brought their homework task presentations about two great national inventors as well as the survey results on the question:“What is the most important invention of all times?“ Later the Trivia game on various scientific questions was organized for the students who were divided into five international groups.

What is more, the students visited the Public Company ORLEN Lietuva which is a petroleum refining company operating the only petroleum refinery in the Baltic States as well as crude oil and petroleum product network and marine terminal. Besides, the students went to Siauliai university to participate in the activities of the scientific event “The night of explorers”. There were presented various scientific innovations on the topics, such as “How could robots see?”, “Is a bike really invented?”, “How do mechanic objects appear?”, etc.

Apart from the serious work, a wide cultural program was organized for our guests. They could try our national dishes of Lowland region, danced to our folk music. They also could enjoy the beauty of such places as Vilnius, Nida, Palanga, Telsiai. The history of our past was also revealed while visiting the Hill of Crosses and the Cold War museum in Plateliai.

At the farewell party in Renavas mansion the headmistress Rima Sirvinskiene concluded by thanking the host families and stating that this project is like a bridge which joins together the past and the present, cognition and innovation, friendship and communion. 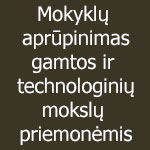